One trend I’ve thoroughly enjoyed is the illustration of classic stories as graphic novels – the artful reimagining of characters and settings, kept true to the books in a way few movies or shows ever are, is a delight, and these graphic novels are a way I’ve been able to rediscover some excellent stories in a fraction of the time a full book would take me to absorb. The most recent book I’ve been lucky enough to find redone as a graphic novel is Redwall, the classic fantasy story by Brian Jacques. 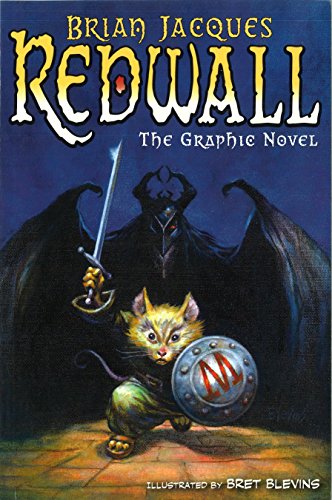 Redwall Abbey, the namesake for the book, was originally founded by a mouse named Martin the Warrior – but now it is a calm place filled with pacifist mice. A savage rat named Cluny the Scourge arrives on the warpath with a veritable army, and he’s determined to take the abbey, its treasures, and its inhabitants for himself. The only ill omen that indicates it may be a challenge?: a dream Cluny has of a warrior mouse, said to be the same Martin whose legend imbues the mice of Redwall with courage to fight back.

The legend of Martin the Warrior is especially important to young mouse Matthias, who wants nothing more than to protect the place and friends he loves. When Cluny the Scourge and his army set off a chain reaction of events inside the abbey, it becomes Matthias’s mission to recover Martin’s legendary sword that’s been lost to time. His journey will take him to long-abandoned corners of the abbey, into dangerous territory outside of its walls, and even through a few secret passages – but will he successfully protect everyone and everything he holds dear? Will Cluny the Scourge – or any of the other lecherous characters we meet on the journey – pilfer Redwall’s weaknesses and succeed in their goals?

I know a lot of adults roughly my age (in their late twenties) were introduced to Redwall because of the animated PBS adaptation, but for those who have never heard of it, this story is a delight in all its forms. I feel it’s accurate to say that Redwall is akin to a middle-school-appropriate A Song of Ice and Fire. Jacques is able to write with excellent complexity as he carries multiple storylines at once; he also wrote the story for children who attended a school for the blind in his native Liverpool, and I recall the book being quite verbose for a middle grade novel. The particular adaptation I recently read, with its illustrations, does an astounding job bringing the visions of the characters to life: the mice all have distinct features and are easy to identify on the page, Cluny is genuinely terrifying in his depiction, and each character’s personality shines through the way adapter Stuart Moore drew them.

As far as graphic novels go, this one earns a 10 out of 10 from me, and it’s an excellent foray into the fantasy genre for younger generations who might be intimidated by the thicker original. Redwall is available for checkout in its original format or in this graphic adaptation at the Charles City Public Library. Stop in or call 641-257-6319 to reserve it today!