Book Review : Patron Saints of Nothing by Randy Ribay

It’s a tradition of Charles City Public Library’s Friday Morning Book Club to read the All Iowa Reads each year - we did that this spring, discussing Little Faith in April 2021. This year, though, we added an additional All Iowa Reads to the docket: the teen selection, titled Patron Saints of Nothing by Randy Ribay. My impressions can likely be attributed to the ages of the characters, but truth be told I found that I preferred Ribay’s story of an American-Filipino teen.

Said teen in Patron Saints of Nothing is Jay Reguero. While he was born in the Philippines to a native father and a white mother, they all immigrated with his siblings to live in Michigan when Jay was only one year old. His connection to the country of his birth is fairly weak with a notable exception: he and his cousin Jun were very close and had, for a long time, maintained a relationship as penpals. Eventually, though, they fell out of touch as Jay became a teen.

It’s a few years later, when Jay is a high school senior trying to get excited about going to the University of Michigan, that Jun is murdered. 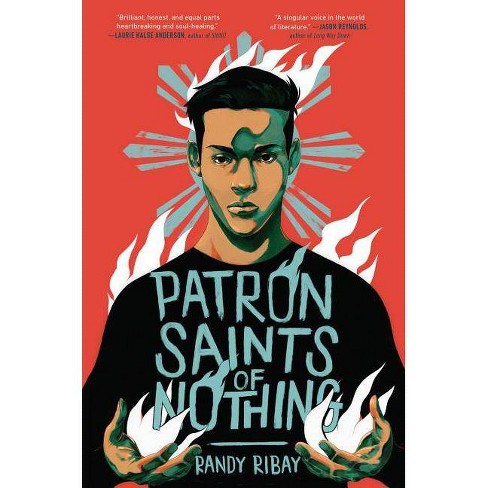 Jun’s death – said to be related to the Philippine war on drugs – takes Jay out of his American bubble, and the questions around it prompt Jay to visit the Philippines on break to try and make some sense of it. Nobody in Jun’s immediate family wants to talk about it or acknowledge that Jun ever existed, much less give him the answers he craves, and so Jay has to get creative in uncovering what happened on his own… and the truth of who Jun was and what happened to him turns out to be more complicated and painful to learn than he could have imagined.

While the rest of the book club allegedly found it to be a middling book (I wasn’t able to attend the discussion), I thought it was overall worth reading. It’s an engrossing perspective on what it means to be American (but not white American) and Filipino (but not familiar with Filipino culture). Part of Jay’s journey is acknowledging that he has so much to learn about his heritage, and unlike some young adult books I felt like Jay really grew throughout. The other thing I enjoyed was how several tropes and expectations were subverted. I won’t spoil any of the ending, but this isn’t a book where everyone claps and cheers for Jay’s work in trying to exonerate his cousin’s name, nor is it a book where Jay singlehandedly solves the drug problems the country experiences. It felt, in a lot of excellent ways, like he and the cast surrounding him were very real people without all the answers.

My main complaint: the first twenty percent or so was the most annoying to get through because Jay spends so much of it kicking himself in his grief over Jun’s death. I do acknowledge that it was all reasonable for his character, though, since he’s a teenager and didn’t know that anything was wrong until it was far too late. It’s at that twenty percent mark, however, that Jay arrives in the Philippines and the story really picks up.

Patron Saints of Nothing is available for checkout at the Charles City Public Library. Stop in or call 641-257-6319 to reserve it today!