Book Review: Lincoln in the Bardo by George Saunders

While I’ve written more than a dozen reviews about books I’ve listened to through Libby, I only discovered audiobooks within the last calendar year or so - I’d tried them prior to 2022 on occasion but had limited success and no long-lasting interest. I couldn’t say exactly what changed, but I’m pleased to admit I’ve become an addict… and yet, being dozens of audiobooks later, I’d never listened to a full-cast performance of a book before Lincoln in the Bardo. 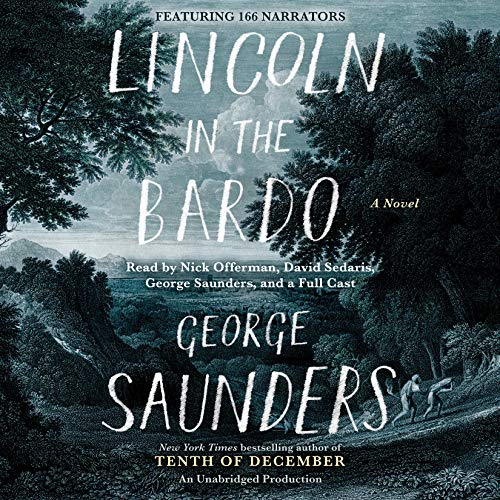 So let me tell you: if you’re a fan of audiobooks and haven’t read this novel by George Saunders, then do I have a HUGE treat for you.

Lincoln in the Bardo takes place one night in February 1862. The verifiable facts include: the American Civil War began less than a year ago; eleven-year-old Willie Lincoln had just died in the White House and been laid to rest in Georgetown Cemetery; and Abraham Lincoln returned to the crypt several times over the course of the night, without company, to hold his boy’s body and grieve. These facts (and others, along with some historical context) are provided roughly every other chapter by sources from the era including newspapers, letters, diaries, and memoirs.

But Lincoln in the Bardo is hardly the historical facts alone - it truly shines in the fictional narrative it spins around that night. The majority of the narration and story comes from the innumerable ghosts in Georgetown Cemetery who welcome the young Willie Lincoln after he’s been interred - including victims of accidents, of suicides, and of illnesses - who all have their own hang-ups and quirks. There are two things these ghosts all have in common, though: none of them realize they’re dead, and they all know that children are in peril if any continue to “tarry” too long with them in the cemetery. But Willie’s father, practically haunting the place this night, is preventing his young son from disappearing due to the hope he brings the boy - with Willie Lincoln’s soul in danger of a fate worse than death, can these ghosts hurry to help the father and son before Willie becomes trapped there forever?

There are exactly 165 unique voices in this book. On the page, points of view are changing constantly, with some obvious differences in written voices but no forward introduction to let you know which character is speaking - only a small line of text at the end of each character’s “entry” confirms who the speaker is. In the audio production, in comparison, these 165 different voices are represented by 165 different voice actors - plus one more if you include the narrator whose voice credits the book’s sources. Whoever cast this book did a phenomenal job, too; notable voices involved include Nick Offerman and David Sedaris (as two of the lead ghosts), Julianne Moore, Ben Stiller, Lena Dunham, Susan Sarandon, Rainn Wilson, Bill Hader, Keegan-Michael Key, Megan Mullally, and 156 other individuals I haven’t listed off. Beginning this audiobook is confusing for the first few chapters, I’ll admit, but it’s well worth it to push through - once I got into the swing of listening, I thought it was an astonishing finished project. Folks who love to read words on pages will surely enjoy themselves, as it won the Booker Prize for 2017, but the audiobook won Audie Audiobook of the Year that year as well; talking about Lincoln in the Bardo without sharing about the audiobook experience would be a huge disservice to those who read this review.

If you’d like to see how these ghosts interact and help the Lincolns this one pivotal night, the paper book and CD audiobook for Lincoln in the Bardo are available both in Charles City Public Library’s collection as well as through BRIDGES and Libby as a downloadable audiobook or ebook. Check them out in an electronic format by logging on to Libby, or come in or call to check it out today!