Most of us, I’m sure, have a preference between fiction and nonfiction. I read far, far less nonfiction because I tend to assume that nonfiction narratives are weaker, but occasionally I’m reminded that this is certainly not a universal truth – especially with Threading My Prayer Rug, a memoir by Pakistani-American Sabeeha Rehman. It was one of those books that I found I plowed through as I learned more about her faith, her life, and how the two have diverged and connected through the years. 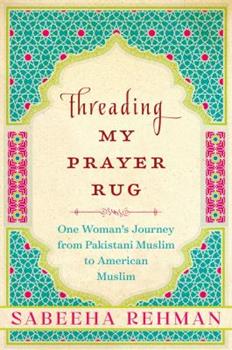 Threading My Prayer Rug is half stories of the author’s life: her upbringing and arranged marriage in Pakistan as well as the new realities she and her family have to handle when she moves to the US, half a world away from her childhood community. Rehman’s experiences are excellent examples of how one can honor religious and cultural traditions in a different and changing world, while staying open minded and occasionally improvising with good intentions. At the same time, however, she’s refreshingly candid about the mistakes she’s made and the lessons she’s learned; one short story she tells is about how she talked to her youngest son, who was in tears, about why having a Christmas tree wasn’t important because they were Muslim… and then admitting she realized there was no harm in it when she visited her son many years later, as an adult, and saw a small Christmas tree in his home. Her inclinations to truly reflect on the reasons why she does what she does, as a Pakistani and a Muslim, make this memoir refreshing.

The anecdotes are perhaps half the content of this book, though. Rehman’s stories are an effective way of easing into the other half: the issues she and the Muslim community have faced as a minority group in the NYC metro area (and in the US in general). The most important thing she’s learned? Extremists are always going to be vocal, but it’s just as important that people who feel moderately voice their opinions, their support, and their dissent. Because of the breadth of her experiences, she’s dedicated much of her life to undercutting Muslim stereotypes and becoming an advocate for interfaith understanding, and this book is an excellent expression of those values and intentions.

Threading My Prayer Rug is available alongside other memoirs and biographies in our nonfiction section at the Charles City Public Library. Stop in or call 641-257-6319 to reserve it today!