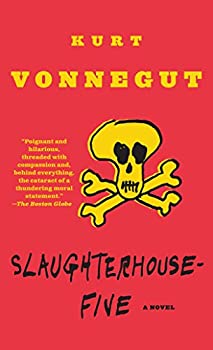 A staple in 20th century literature and certainly one of the more unorthodox “classics” in the cannon, Slaughterhouse-Five by Kurt Vonnegut is one of those books I find I keep coming back to every few years.

Upon first read, it’s an odd mixture of war fiction, biographical nonfiction, and science fiction. Billy Pilgrim is our fictional main character who survives the fire-bombing of Dresden, Germany at the end of World War II; he’s also notable for being kidnapped by aliens and taken to the planet Tralfamadore some twenty years later. With the introduction Listen: Billy Pilgrim has come unstuck in time, Vonnegut shoots off like a rocket and doesn’t slow down for the next 250-some pages – it was electric to read as a teen, at least compared to the other books we read for high school literature, and it was especially interesting with the way Vonnegut subverts storytelling expectations and occasionally reminds readers that “I was there” or “that was me” when he appears as a background character.

Upon second or third or fourth read, the excitement of the aliens wears off a bit. Billy is… well, he’s not a bad guy, nor a particularly good guy for that matter. But Billy is sympathetic because he’s trapped. He’s stuck, like a bug in amber, as life takes place around him and all of his choices have already been made, even if they haven’t happened. Vonnegut’s connections made throughout the story shine all the more, from the repetition of phrases like “mustard gas and roses” to the idea that seeing a barbershop quartet is enough to trigger PTSD. The wonder of Slaughterhouse-Five isn’t in figuring out what’s going to happen – rather, the excitement is in knowing what happens, waiting for the penny to drop, and examining the emotion that comes about when some of the pennies never drop.

Slaughterhouse-Five is the first of six books in Charles City Public Library’s Friday Morning Book Club for Fall 2021, but if you’d like to read it on your own time, you can find a copy in our fiction section for regular check-out.