Those that follow me, know that I have been reading a lot about school shootings lately. The True Crime Book Club I lead is going to be discussing Columbine by Dave Cullen for our November meeting. After reading about Columbine, I began to seek out all titles that dealt with school shootings.

Nineteen Minutes by Jodi Picoult is a fictional account of a school shooting that happens in a small community named Sterling, New Hampshire. 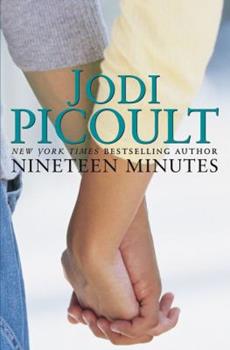 It started out an ordinary day for Josie Cormier at school. She had no idea that a friend growing up was going to come in and go on a shooting spree and that she would be subject to witness the horrific events.

Peter Houghton has been picked on since kindergarten. He just can't take the humiliation anymore. His actions will forever change the course of his life and will shake a community to its core.

Alex Cormier, Jose's mom, is a judge. Her biggest case is going to be the trial of the school shooter. Can she handle residing over this case since her daughter was a witness? And why can't her daughter remember what happened in the school?

Nineteen people die in nineteen minutes in this gut wrenching, fictional story. It shows the audience a glimpse of what can happen when a tragedy like this occurs. You will also struggle with the effects of bullying on kid's and the line of right and wrong. The story is told from the perspective of seven different characters which shows the events before and after the shooting from multiple perspectives.

You must read this book until the end to find out the shocking twist. Nineteen minutes is available at Charles City Public Library and in audio and eBook downloads from BRIDGES and in Spanish audio from Hoopla. Visit www.charles-city.lib.ia.us to access downloadable options or call 641-257-6319 to place a reserve.