And now for something completely different: alien romance/erotica. 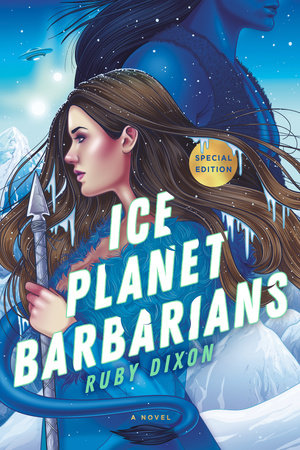 catches my eye, I should read it, regardless of the size of my forehead. With the social media Ice Planet Barbarians has gained, I found that curiosity got the better of me and resolved to check it out. At worst, I expected this book to be 90% smut, and at best I figured maybe it would have a few bits I could work into inside jokes with friends. What I read wasn’t exactly either of those things and was actually… pretty good? Despite my lower expectations, it was pretty good.

I’m sure a few people have said “nope” to this review and hit the back button already, but here’s the pitch if you’re curious: our female protagonist, Georgie, is abducted by some pretty antagonistic aliens. Already that’s not great, but then she and several other human women end up stranded on an ice planet with no supplies. Not seeing many options, Georgie becomes their de facto leader and volunteers herself to leave their crash site and find help.

“Help” is our male protagonist - a native to the planet named Vektal. He’s a seven-foot-tall, blue-skinned, different-from-the-kidnappers species of alien. Vektal’s also completely turned on for Georgie because she’s his alien soulmate (how lucky!), and, despite not speaking the same language, it doesn’t take much for them to warm up to each other. But, fortunately for those who require a smidgen of plot, the book gets more complicated than that: they have to work together as a team to save Georgie’s friends before they freeze, starve, or die from the unhealthy gases on the atmosphere of this ice planet. Will Georgie and these humans survive and make it back to Earth? Or, as Georgie comes to question, does she even want to make it back to Earth if it means leaving Vektal?

I’ll be upfront and admit that declaring it “pretty good” alien erotica has a couple of asterisks: it follows a typical “we’re meant to be together because we’re mates” train of logic like a lot of supernatural/sci-fi romances, there’s a nondescript instance of sexual assault pretty early on in the book (a total surprise for me, since romance almost always shys away from depicting SA), and the writing itself isn’t anything to write home about. But the book is easy to zip through, it’s an entertaining premise, and the erotic scenes aren’t bad. I enjoyed that it’s higher stakes than other harlequins I’ve read - these humans are trying not to die on an ice planet with no supplies, y’all - and at the same time I appreciated that it recognizes its audience and often winks at the reader with little jokes, good banter, and funny one-liners.

The most important detail I want to emphasize that took this book up a peg for me? Our male protagonist is all about getting consent from Georgie, despite “consent” being portrayed as a relatively new concept to him. Even better: once he gets the idea down, he insists his other sexy alien friends learn it too. In a genre that can sometimes portray dubious consent, assault, or abuse as sexy - I’m looking at you, Fifty Shades of Grey - this felt huge. It makes me wish this were the more popular book of the two, for sure.

Ice Planet Barbarians is in Charles City Public Library’s physical and virtual collections for all patrons. Check it out online via Libby, or get the physical copy today by stopping in or calling 641-257-6319!