Do you feel as though J.R.R. Tolkien’s classic world of Middle-Earth may be worth trying, but are you unable to get in the right mindset to read the books? Boy, does finding a good version of The Hobbit help fix that! 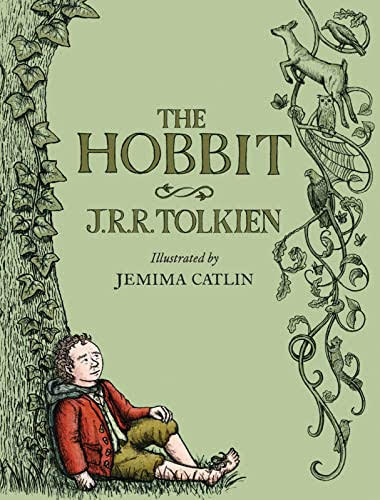 Growing up, I had an edition of The Hobbit sitting on my shelf that I only tried to pick up once. The edition on my shelf looked boring, frankly, roughly the size and thickness of a large harlequin but without nearly as intriguing (ahem) of a cover. It wasn’t until I was an adult, at least fifteen years later, that I learned that The Hobbit is a children’s story… to which I still wonder: “Who decided it should be printed in a book like I had, thick and in a dry format without anything to help keep a child’s attention??” This is thankfully not an issue at Charles City Public Library – we’ve got multiple renditions of the story on hand, and none of them look nearly so dull as the one I couldn’t force myself to pick up.

While the writing style is a bit antiquated, as it was first published in the 1930s, it’s definitely easy enough for a child to appreciate, and the plot is classic. For the uninitiated, The Hobbit revolves around the adventure of a certain hobbit named Bilbo Baggins. He begins the story more than comfortable living in his hobbit hole and absolutely not interested in any excitement to sully his good name, thank you very much. Well, he didn’t believe he was anyway, until the wizard Gandalf encounters him, foists him into hosting a tea party for more than a dozen dwarves (for Bilbo would never be impolite enough to turn away guests), and rather debatably tricks him into becoming an accomplice adventurer as the dwarves set out on a long journey to reclaim treasure and ancestral honor. To do so, they and Bilbo must travel through the many mountains, forests, and dangers to the east. Along their journey they will encounter nasty creatures such as goblins, trolls, giants, and (certainly not least) the great dragon Smaug… and perhaps, along the way, Bilbo will grow a sense of adventure and become a hero after all.

The two best ways to read The Hobbit, I think, are either as an audiobook - where the songs Tolkien includes can be heard through a tune and the characters each have their unique voices – or as this edition, which actually looks like a children’s book. It’s certainly better shared with a compatriot, whether that be a child or another interested adult, but it proves to be just as wonderful when tackled alone. It’s a great way to become used to the lore and lilt of Tolkien’s writing, and it’s certainly a good point to jump off and read The Lord of the Rings afterward.

The Hobbit is available as an illustrated edition, a text-only edition, a graphic novel, and an audiobook at the Charles City Public Library. Stop in or call 641-257-6319 to reserve your preference today!