Given how rarely I read books in one sitting anymore, I was wholly surprised to find I was glued to the memoir Consent, by Vanessa Springora. An examination of complicity culture, the abuse of minors, power dynamics, trauma, and healing, I found it a heartbreaking and absorbing story where the author was able, ultimately, to reclaim her past and indict those who shaped her 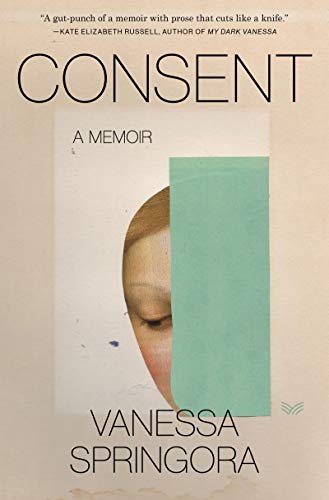 Few summaries on the inner flaps of books have grabbed me as thoroughly as this one did. The copy belonging to Charles City Public Library reads (not presented in its entirety):

Vanessa had been waiting for love since she was five years old. At thirteen, she thought she found it [...] Vanessa met G. at a dinner party boasting some of France's biggest authors. G. was a man with an electric presence - brilliant, romantic, with a fatherly smile. The attraction was immediate, and mutual. Vanessa and G. went on dates to bookshops, exchanged passionate letters, shared tender embraces in stairwells. G. was fifty years old. This is not a love story.

I agree – it is not a love story. Their relationship lasted roughly two years, was one of many that G. had with underage children, and is a traumatic catalyst that Springora has never been able to escape. This memoir covers a lot of ground, from Springora’s pre-pubescent understandings of relationships to finding letters from G. on her work-desk thirty-plus years after their last meeting; since its publication in French last year, we also have context to know that this book caused an uproar among the literary elite in France and that G. (now in his eighties) is set to appear on trial for his various pedophiliac relationships.

Consent is a book that I found, in a contradicting way, easy to read. Its content is absolutely appalling, but Springora tells her story directly and without graphic imagery. The prose she uses is sharp, dispassionate, and yet genuine in its presentation. It’s this confident, thought-out language that makes this book a successful reclamation of Springora’s adolescence; as a victim who was written into G.’s novels without permission and whose own letters had been archived into French literary history without her knowledge, she openly admits she bode her time to make sure she had the last word for the world. Her tactful handling of identities plays into this waiting well: few peers are referred to by their names, and she refers to herself in quoted conversation as V. rather than Vanessa. Although it’s an open secret who G. is (it’s easy to Google), reducing him to an initial and not a famed name places the responsibility for his grooming and manipulation squarely back on his shoulders and all but openly criticizes his circle of friends and fans – as well as the author’s mother – for their defense of him.

Particularly in the wake of the #MeToo movement, Consent is a memoir of a painful adolescence that simultaneously feels terrible to read and triumphant to finish. Those who suspect it may grip them as it gripped me can check it out at the Charles City Public Library – call 641-257-6319 or stop in today to reserve a copy.